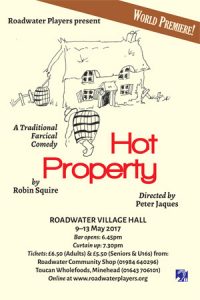 Hot Property tells the tale of carpet-chewing cottage renovator Tony Proudfoot (Ben Lincott) who has lost his business, spouse and self-respect (not necessarily in that order) and hopes with ever-escalating desperation to find a way of restoring his fortunes. Tony needs a plan of action to survive, and things don’t go entirely to plan.

A surveyor intends to run up a massive repair bill on an upmarket London property. Meanwhile Tony, its increasingly anguished occupant, schemes and screams while his world falls apart around him. Add to the mix a brash bingo millionaire, an interfering mother who can only make things worse, a marriage guidance counsellor who might not be quite what he seems, the dottily-romantic owner of a crumbling cottage going for a song but only if the buyer is exactly right, a ponderous policeman in search of an opportunistic flasher, and the way is open for a feast of confusion, misdirection, deceit and manically frolicsome fun. 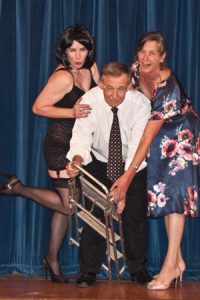 Photo: surveyor Dalrymple (Chris Marshall) briefly finds himself bosom pals with a lively lass with a cunning scheme (Jackie Heard), and a weary wife with an adulterous agenda (Phaedra Rush).

Robin is very grateful to the Roadwater Players for undertaking the World Premiere of his first play. When the script for the play was first completed, inspired by fond childhood memories seeing a similar farce performed on the London stage, Robin’s agent approached the brilliant Lord Brian Rix. His encouraging reply kindly put us in contact with Ray Cooney.

Ray Cooney read the play, declaring it has “Excellent dialogue and well-contrived situations”. He recommended an initial performance at a regional theatre or by a keen amateur dramatics group. Roadwater Players decided to be the pioneers, directed by Peter Jaques, a friend and professional colleague of Robin’s since they worked together more than 20 years ago on the project described in Robin’s book The Unmaking of a Britflick. Their decision to perform Hot Property came just a few days before news of Lord Brian Rix’s death, on 20 August 2016. Robin has decided to respectfully dedicate this play to Lord Rix’s memory.

Following Ray Cooney’s advice, after the World Premiere by the Roadwater Players Robin hopes to see Hot Property performed in many more theatres – for lots of laughs!

This review appeared in the West Somerset Free Press on 19 May 2017, following the Roadwater Players’ performance, leaving Rob, by his own admission ‘slightly blushing at this glowing review’. 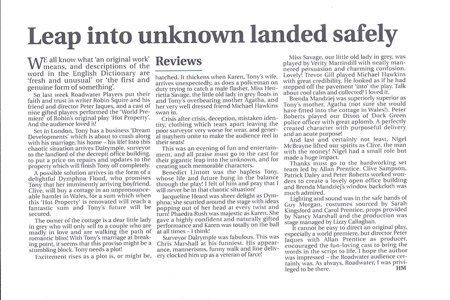 We all know what ‘an original work’ means, and descriptions of the word in the English Dictionary are ‘fresh and unusual’ or ‘the first and genuine form of something.’

So last week Roadwater Players put their faith and trust in writer Robin Squire and his friend and director Peter Jaques, and a cast of nine gifted players performed the ‘World Premiere’ of Robin’s original play ‘Hot Property’. And the audience loved it!

Set in London, Tony has a business ‘Dream Developments’, which is about to crash along with his marriage, his home – his life! Into this chaotic situation arrives Dalrymple, surveyor to the landlord of the decrepit office building, to put a price on repairs and updates to the property which will finish Tony off completely.
A possible solution arrives in the form of a delightful Dymphna Flood who promises Tony that her imminently arriving boyfriend, Clive, will buy a cottage in an unpronounceable hamlet in Wales, for a sum which when this ‘Hot Property’ is renovated will reach a fantastic sum and Tony’s future will be secured.

The owner of the cottage is a dear little lady in grey who will only sell to a couple who are madly in love and are walking the path of romantic bliss! With Tony’s marriage at breaking point, it seems that this proviso might be a stumbling block. Tony needs a plot!
Excitement rises as a plot is, or might be, hatched. It thickens when Karen, Tony’s wife, arrives unexpectedly, as does a policeman on duty trying to catch a male flasher, Miss Henrietta Savage, the little old lady in grey floats in and Tony’s overbearing mother Agatha, and her very well dressed friend Michael Hawkins swan in.

Crisis after crisis, deception, mistaken identity, clothing which tears apart leaving the poor surveyor very worse for wear, and general mayhem unite to make the audience reel in their seats!

This was an evening of fun and entertainment, and all praise must go to the cast for their gigantic leap into the unknown, and for creating such memorable characters.

Benedict Lintott was the hapless Tony, whose life and future hung in the balance through the play! I felt for him and pray that I will never be in that chaotic situation!

Jacqueline Heard was sheer delight as Dymphna; she scuttled around the stage with ideas popping out of her head at every twist and turn! Phaedra Rush was majestic as Karen. She gave a highly confident and naturally gifted performance and Karen was totally on the ball at all times – I think!

Surveyor Dalrymple was fabulous. This was Chris Marshall at his funniest. His appearance, mannerisms, funny walk and line delivery clocked him up as a veteran of farce!

Miss Savage, our little old lady in grey, was played by Verity Martindill with neatly mannered persuasion and charming confusion. Lovely! Trevor Gill played Michael Hawkins with great credibility. He looked as if he had stepped off the pavement ‘into’ the play. Talk about cool calm and collected! I loved it.

Brenda Mandziej was superiorly superior as Tony’s mother, Agatha (not sure she would have fitted into the cottage in Wales!). Peter Roberts played our Dixon of Dock Green police officer with great aplomb. A perfectly created character with purposeful delivery and an acute purpose!

And last and certainly not least, Nigel McBrayne lifted our spirits as Clive, the man with the money! Nigel had a small role but made a huge impact.

Thanks must go to the hardworking set team led by Allan Prentice. Clive Sampson, Patrick Daley and Peter Roberts worked wonders to create a lovely open office building and Brenda Mandziej’s window backcloth was much admired.

Lighting and sound was in the safe hands of Guy Morgan, costumes sourced by Sarah Kingsford and Carol Prentice, props provided by Nancy Marshall and the production was stage managed by Lizzy Callaghan.

It cannot be easy to direct an original play, especially a world premiere, but director Peter Jaques with Allan Prentice as producer, encouraged the fun-loving cast to bring the words in the script to life. I hope the author was impressed – the Roadwater audience certainly was. As always, Roadwater, I was privileged to be there.
HM