My maternal grandfather, Harry Floyd, was a London policeman. He separated from my grandmother when I was a small child, so I didn’t meet him till I was an adult and he’d long since retired from the force. He was a court usher at Kingston Assizes well into old age, and a staunch member of the police lodge of the Freemasons, to some get-togethers of which I accompanied him. We got on well, and I used to drive him around, and we’d have drinks and chat our heads off, all of which was a great inspiration when it came to writing about a detective inspector called Solomon Dearborn in Victorian London who, while dating back a bit earlier than my grandfather, is based not a little on him and the way he talked and saw the world.

Born in 1883, my grandfather joined the Metropolitan Police at the age of 27 in 1910. One of his first assignments was in January 1911 at the Siege of Sidney Street in London’s East End. Four policemen had already been shot dead by a gang. When word came that some of its members, led by a Latvian anarchist known as Peter the Painter, were holed up at a house at 100 Sidney Street, Harry was one of the uniformed constables who assembled there as the bullets blasted out from the building from the well-armed gang. Winston Churchill, then Home Secretary, a decade after his military exploits during the Boer War, was there too. Grandad spoke of their surprise and relief when smoke and flames came from the house, lit by the men inside as a final gesture, putting an end to the siege and the lives of the gang. (See the fascinating British Pathé footage of the siege)

When I came to write The Mystery of the Stolen Brides, the concept of this impassioned Socialist movement stayed with me from Grandad’s stories, and forms part of the background to the narrative. The movement dates back to the 1840s and the time of the Chartists, with its subterranean and dangerous connotations espoused by the likes of Peter the Painter.

As a young copper on the beat at Hoxton, then a warren of narrow streets teeming with crime and potential violence, an essential part of Harry’s uniform was the short cape the police wore at the time. He told me it could be unclipped and swung like a heavy weight at anyone who tried “to cut up rough”, as he put it.

After some years on the beat in the East End, he was promoted to sergeant and posted to Richmond in Surrey. He enjoyed telling me about the perennial conflicts with the ‘race gangs’, groups of thugs who operated at race courses, notably Epsom, fleecing people, roughing up other gangs, picking pockets and whatever else, with the occasional maiming or murder. On one of our outings, Grandad got me to drive him to a pub at the top of Kingston Hill, where a dangerous gang had gathered one summer in the 1920s. He told me how he stood in the road and stopped a tram, then commandeered it to take him up the hill. On arrival, he stepped down and approached the gang who were lounging about in the garden. He was a crack shot, represented his police unit at Bisley, and had been issued with a revolver. As more police came running, the uniformed Harry announced in ringing tones: “You’re all under arrest,” adding with a wave of his firearm: “I have a gun, and will not hesitate to use it.” Grandad had a straight, calm way of looking at you. They believed him. They came quietly.

At the Barnes end of the long straight road called Castelnau from London’s Hammersmith Bridge, Grandad would occasionally set up a police speed trap. More than once during the 1920s he caught the land speed record holder Henry Segrave roaring in a powerful roadster well above the designated limit. Grandad told me they almost became friends as the great man would groan “Not you again, sergeant! How’s the family?” Recently at Brooklands Motor Museum, I saw a photo of Sir Henry and the Sunbeam he drove. It gave me a pang, as he may well have been at the wheel of that very car when my grandfather stopped him.

Harry’s mother ran a grocery store in the East End. In summer she would put out the produce for sale in stalls on the pavement, so as a teenager Harry would serve customers up until midnight. His inspiration for joining the force was his father, Henry Floyd, a river policeman who patrolled the Thames in a rowing boat long before engines were installed. He took the youthful Harry out many a night to acquaint him with the grim realities of police work. Henry senior was operating at much the same time as Inspector Dearborn, so my descriptions of London in this period are tinged with genuine family nostalgia.

…and also through this link to Little, Brown’s Crime Vault (click on the logo) 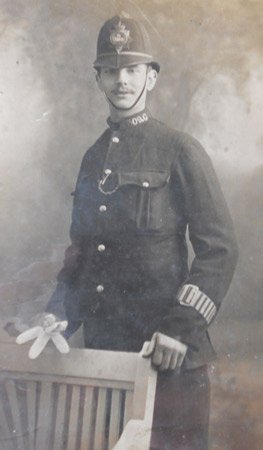 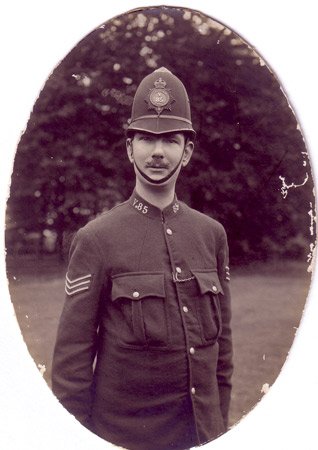 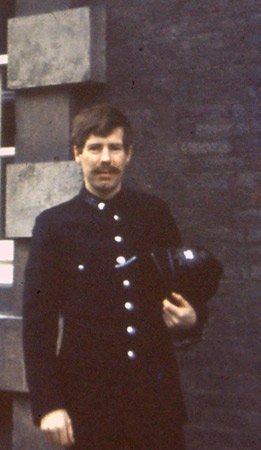 Sergeant Harry Floyd Senior when he ran the copshop in Richmond, Surrey, having moved his family to Bushwood Road in Kew where my mother was brought up

…and Yours Truly, following in Harry’s bootsteps, on location during a TV production 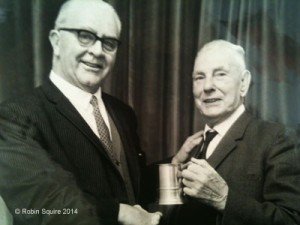 This photo has been on my wall for years. It shows Harry Floyd (on the right) receiving a police Long Service award – I still have the tankard. Does anyone know who the other gentleman is?